Great! As a recap we went through the first two columns, one at a time, starting from the left side.

Now let's hear the first two columns but row by row such that we can compare and contrast the sounds (i.e., aspirated vs. unaspirated):
Hopefully you can catch the subtle different between each pair. If not, no worries, feel free to revisit this video anytime. Good! Now let's finally hear the rest of the initials. We will go through the rest of them row by row until we have fully covered each initial. Furthermore, we will spend a bit more time focusing on the sounds that are more difficult.

Moving on, let's look at the example below. On the left are Chinese Characters and the right are Pinyin words. Take a minute to look at both of them without worrying about trying to understand it. You may recognize and know how to say the first line from the last lesson. That is fine as well.

Although they look completely different, you might notice a pattern: they are both three lines long and similar in length. If you guessed correctly, the pinyin on the right is the pronunciation for the characters on the left. This example is important because it highlights that every chinese character can be deconstructed into pinyin.
Fantastic! This is a huge discovery. While many people think Chinese looks more complex than other languages, pinyin reduces the complexity significantly. Similar to romance languages, you can now identify the pronunciation and reproduce it. Chinese has now become one degree easier.

Great. Now let's see what that short paragraph actually means. If you recall from the previous lesson, you probably known

Great. Now let's jump into actually finding out how to pronounce the word. 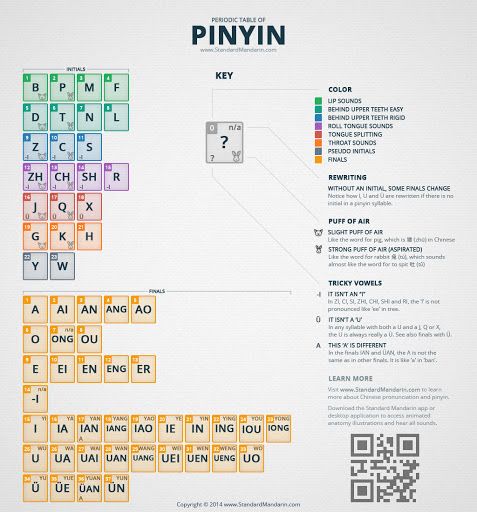 There are two parts to the pinyin: "initial" and "final". If we recall the earlier image, the "initial"s are the first part of the pinyin and evidently, the "finals" is the second part of the pinyin. "There are 21 initials (and two special initials) and 38 finals in total in Chinese Pinyin. Some initials and some finals cannot be combined together. According to certain rules, all these initials and finals can actually form a total of about 400 syllables" (2)
If you look at the chart above, the initials is split up by rows or color. This is the standard way of teaching initials. However, you can also break the initials down by columns. The first two colors (starting from the left side) can be grouped by aspirated and unaspirated sounds.
This grouping will allow you to learn the initials slightly faster. `

Let's watch a video that shows the pronunciation of this column:
Conversely, if we look at the second column: p, t, k, q, c, ch, w. They all are aspirated sounds in Chinese.
Let's look at the below to find out how to pronounce each sound starting with the first column first and then the second column. Let's watch the video below to see how the second column should sound like:
Great! Now let's address certain, common difficulties with this first set of initials (i.e., first two rows)
Let's move onto learning the rest of the Initials!
Source:
​(2) https://www.futurelearn.com/info/courses/chinese-pronunciation-tone/0/steps/64892
(3) https://www.purpleculture.net/chinese-pinyin-chart/